Few people would guess the best-selling Dutch singer of all time is a woman from Sulawesi’s Tondano. Anneke Grönloh’s first record was in her native Malay language, and she went on to sell over 30 million records worldwide throughout her career.

“The Indos introduced the electric guitar to the Netherlands,” says music commentator and journalist Leo Blokhuis. “Anyone in the Netherlands who was interested in going into pop music listened to Indorock.”

A recent exhibition called “Indo Icons in Dutch Pop Music” underlined the contribution of the Indos — those of mixed Indonesian and Dutch heritage — to Dutch pop music. The exhibition was held at the Tong Tong Fair, a major annual event in The Hague celebrating the Dutch Indo community.
2018  Article by LINAWATI SIDARTO - THE JAKARTA POST
The exhibition also featured vignettes from Klanken van Oorsprong (Sounds of Our Roots), a new documentary by Hetty Naaijkens-Retel Helmrich about Indo musicians. The beginnings of rock music in the Netherlands, and the part that Indos played in that, was a convergence of seemingly unrelated historical events. During colonial rule in Indonesia, many Dutch civil servants and merchants came to live in the archipelago, married local residents and raised families. After Indonesia became independent, hundreds of thousands of Indos migrated back to the Netherlands, which mostly happened from the mid-1940s until 1959.

These new migrants, Blokhuis explains, brought with them the music they had been listening to: American tunes, including rock ‘n’ roll. “When the Dutch were occupied by the Germans between 1940 and 1945, United States radio stations were blocked,” Blokhuis explains.

Meanwhile, American music — jazz, blues and later rock ‘n’ roll — was popular from the very start in the Dutch East Indies. When this territory was occupied by the Japanese between 1942 and 1945, people there were still able to listen to the VOA (Voice of America), Blokhuis continues, and consequently to American music.

Another historical influence came much earlier: the arrival of the Portuguese in the early 16th century also introduced a predecessor of the string instrument to the Indonesian archipelago.

“The guitar was much more commonly used in the Dutch East Indies. Meanwhile, there was no tradition of guitar playing in the Netherlands,” Blokhuis explains.

Naaijkens-Retel Helmrich noted the musicians among these new migrants “picked up their instruments and started playing and singing almost immediately after their arrival in the Netherlands”. The Dutch youth, who had just woken up to rock ‘n’ roll with movies such as Rock Around the Clock, enthusiastically embraced these artists.

The major stars — the Tielman Brothers, Anneke Grönloh, the Blue Diamonds and Sandra Reemer — “scored one hit after another in the 1960s. They were trailblazers of youth culture in the Netherlands”, read the introduction of the Tong Tong exhibition.

The exhibition did not stop at that golden era, but continued in time to show the ongoing influence of Indos in Dutch pop culture.​ 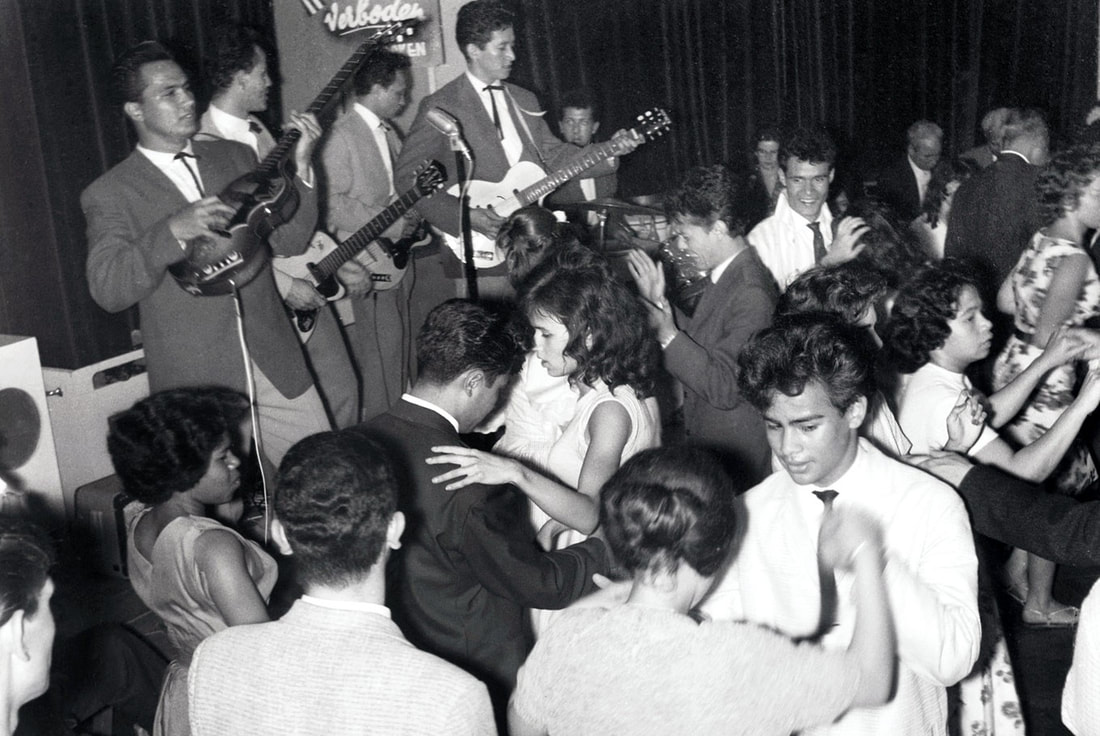 “Even I was surprised, once I looked deeper into it, at how many Indo musicians we have,” says Ricci Scheldwacht, the exhibition’s co-creator.

Doe Maar, the biggest Dutch band in the 1980s, was formed by Ernst Jansz, born in 1948 in Amsterdam from an Indo father and Dutch mother. Among its hits was “Rumah Saya” (My Home), a song about Jansz’ native land and that of his father’s.

From the 1990s into the millennium, Indo bands include Kane, Lois Lane and DJ Diablo. In March this year, the winner of the immensely popular television show the Voice Kids was ten-year-old Yosina Rumajauw, whose parents have roots in Papua.

Luqman, an Indonesian graduate student at Rotterdam’s Erasmus University, was walking through the Tong Tong exhibition when he saw a familiar name: “The Tielman Brothers! My father used to listen to their records,” he said.

Brothers Ruud and Riem de Wolff were born in Jakarta in the 1940s, and moved to the Netherlands in 1949. Ruud was training for athletics championships when he saw that younger brother Riem was attracting all the girls with his guitar, and the two started playing together.

A record executive heard them play at a party, and signed them up in 1959. Their first record, a cover of the Everly Brothers’ “Till I Kissed You”, was an instant hit.

The next year, they came out with another album, and one of the songs, “Ramona”, was all the rage not only in the Netherlands, but also in Spain, Germany and even in the US.

The Blue Diamonds also became popular in Asia, and one of their first Asian visits was to their old homeland. “It was as if the fans were saying ‘those long-lost sons who made a career in faraway Europe have come home!’,” Riem said in a television interview in 2014. “And it felt as if we’d never left. The smells, the words, and we were instantly at home.”

While “Ramona” remained their biggest hit, the Blue Diamonds continued playing until Ruud’s death in 2000, and sold millions of records. Riem continued to sing until he passed away last year.

Reggy, Ponthon, Andy and Loulou Tielman were born in the 1930s in the former Dutch East Indies, from parents with a mixed heritage of Timorese, Dutch, German and Menadonese.

They started performing as teenagers in Surabaya under the name The Timor Rhythm Brothers, and gained enough popularity to perform at former president Sukarno’s presidential palace in Jakarta.

In 1957, the Tielmans emigrated to the Netherlands, and literally rocked the Dutch music scene: their first single “Rock Little Baby of Mine” in 1958 is seen by music historians as the beginning of Dutch pop music.

Their first live performance — hip swinging, guitar flailing — on state television in 1960 took the relatively conservative Dutch broadcast world by storm. It was scorned by the established critics but embraced by the young generation just waking up to rock ‘n’ roll.

While the height of their popularity lasted until the mid-1960s — they were also celebrated in neighboring Germany — the Tielmans continued to play until the very end.

Andy Tielman, dubbed “the Godfather of Dutch Pop Music”, performed in The Hague less than six months before his death in November 2011.

​Anneke was born in Tondano in 1942, and spent her childhood in a Japanese internment camp with her Minahasan mother, while her father — a Dutch officer — was a prisoner of war. In 1947, the family moved to the Netherlands.

She started performing in her early teens in rock ‘n’ roll shows, and landed her first record deal after she won a talent show in 1959 Interestingly, she first became famous in Southeast Asia with her debut single “Asmara” (Love), a song she wrote in her native Malay-Indonesian language. In Singapore, the song became a number-one hit.

Her big breakthrough in the Netherlands came in 1962 with “Brandend Zand” (Burning Sand). Up until the mid-1960s she scored numerous hits in Europe and Southeast Asia, including with the Indonesian-language songs “Nina Bobo” (Lullaby) and “Boeroeng Kaka Toea” (Cockatoo). In those years, she also toured Asia, including Indonesia, with the Blue Diamonds.

In later years, she combined her singing with acting on stage and on screen, and television performances. Chronic lung problems forced her to stop singing, with an emotional farewell performance in August 2017, where she sang with oxygen tubes.

Guitar Star Arnold van Dongen, ex-Lois Lane, still an in demand session player showing off his skills with non other than Candy Dulfer and Trijntje  oosterhuis.

Solo artist and leadsinger of Volumia.